The Importance of Swim Training 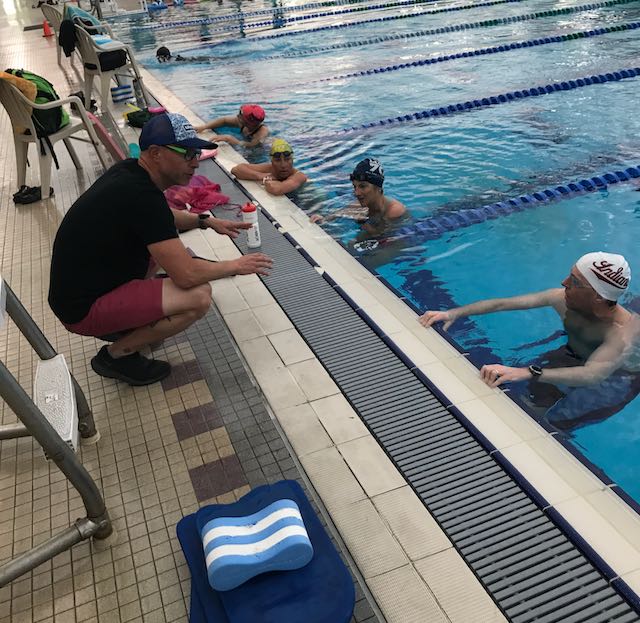 In the more than two decades that I have been in the sport there are a few truisms that I have learned about triathlon and one of them that has held up over all of that time is this: There are two kinds of triathletes-those who come from a swim background and the rest who wish that the swim would just stay in the background.

There is no doubt in my mind that although it makes up a small fraction of both the time and distance of the whole race completing the swim is what causes most triathletes the majority of their anxiety and gives them the most satisfaction and feeling of accomplishment when all is said and done.

For the many, many athletes who come to triathlon like I did and have to first learn how to swim in order to do this sport, swimming has a whole extra layer of difficulty. Of the three sports, swimming is the hardest to learn, get proficient at and see gains in from training. It is the last of these that makes all of the effort required for swim training at times seem less than an efficient use of time and many athletes will find themselves questioning if they should really be swimming when instead they could be biking or running.

In this blog post I want to make the argument for why swim training is so important and why, even though it makes up the smallest part of the race, it should have an outsized role in your training plan. To do that, I’ll address the arguments and questions that I most frequently hear from my own athletes who bristle when I tell them about how I incorporate more swimming than they have done in the past.

I have poor technique, so why should I swim more if what I really need is to improve my stroke?

This is one of the main arguments that I used to make to my own coach. What’s the point, I would ask, of getting in to the pool day in and day out and doing laps with poor technique? It’s not like I am going to get any better with this crummy stroke of mine.

To a certain degree there is some truth to this. Swimming as I said earlier is in fact a very technique dependent activity. Those with good technique go much faster than those without it. However, there is more to swimming than just technique. There is also fitness to be considered. By swimming more, even with your purportedly poor technique, you will become more fit and more able to sustain your poor technique and thereby be able to sustain that ‘poor’ stroke for longer. As a triathlete potentially training to swim as much as 2.4 miles I imagine that you could certainly see the merit in that?!

There is also the consideration that swimming more and incorporating drills in to your swimming can over the long run help you improve that technique. In time this will also lead to improvements in swim times so my response to the original question is; swim more to become more fit with the stroke that you have and to slowly tweak it to be better.

The swim is such a short part of the race why do I need to swim so many hours of my training per week?

This is a legitimate question and many coaches will apportion training hours similar to how a triathlon breaks down. For example, if an athlete takes 14 hours to complete an Ironman and their swim time is 1.5 hours, the swim is  just about 10% of their race and therefor a coach may choose to give no more than 10% of training hours to the swim.

Personally I do not believe in this kind of division of labor. Fundamentally I disagree with it because I believe that fitness in the swim is paramount for setting up the rest of the race and the only way to get good, solid swim fitness is to swim. A lot.

My half and full Ironman athletes swim about 9-11,000m per week and almost all tell me that this is far more than any previous coach gave them. What they also invariably tell me is that when they reach the end of the swim and start the bike, they feel fresher than they ever did before and that this continues long in to the race.

Having a solid base of swim training allows for the best possible swim fitness and really allows for this kind of head start coming out of T1 and even later out of T2. How you get through the swim establishes how you will do for the whole race-will you be starting out short of breath, with a high heart rate and already behind on calories because the swim took so much effort or will you be coming out of the water feeling relatively fresh with a low heart rate? The difference is in how much swim training you put in leading up to race day. (It is true that for triathletes coming from a long swim background, this can be modified. Pure swimmers do not need to swim quite as much to get the fitness and speed on race day as later onset swimmers)

I spend so much time in the pool and see almost no change in my times in races. What’s the point?

As I have already said, there are multiple important reasons for swimming a lot during training and improving your swim time is actually the least important of these. The reason for that is because the sentiment expressed in this argument is quite simply accurate. It is really hard to make significant gains in swim times even with a lot of swim training. But, as I have already noted (and hopefully convinced you) it is still very much worth the effort.

And, this isn’t to say that gains can’t be made, just that one shouldn’t expect substantial ones and that this really shouldn’t be the focus of why all the time in the pool is being spent. Still, the best way to swim faster is to spend a lot of time swimming fast in training. That’s why I give my athletes so many sets of fast 25’s, 50’s, 100’s, 200’s and higher. Swimming increasing distances for increasing numbers of sets with shorter rest is the best way to get faster (albeit incrementally) over time.

When I start with every new athlete I always ask them to ‘put their trust in the process’. I want them to ask questions about why I plan things the way that I do but in many respects it is hard for me to provide proof of concept until they do their first race and so the rationale for all the swimming can seem difficult to get their head around at first.

Invariably though, after that first race they finally come to see that what I was saying from the beginning of our time together had merit; swim a lot more in training and you will feel as though you swam a lot less during your race. After all, isn’t that when it really matters? If you can get to your bike in a slightly quicker time feeling much better than you ever did before, well, in my mind that is a big win and worth every meter that was swum in training  to get to that point.

Jeff Sankoff is a LifeSport Coach, the TriDoc, an emergency physician, triathlete and USAT and Ironman University certified triathlon coach. He works with athletes of all backgrounds and abilities. To learn more about working with Jeff to achieve your triathlon goals, please contact office@lifesportcoaching.com and learn more about Jeff on his coaching page.