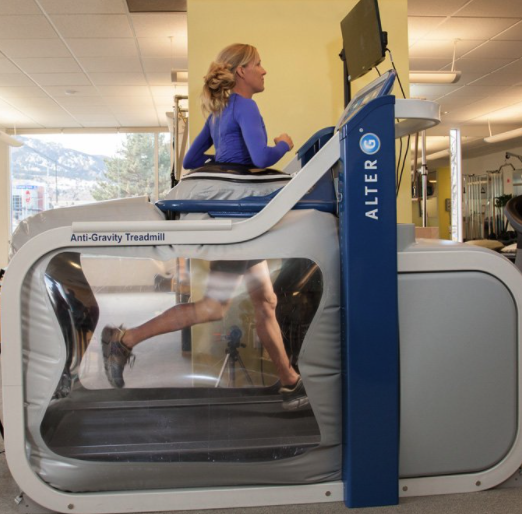 Of the three disciplines in triathlon, running is by far the most common cause of injury amongst triathletes and is frequently the cause of prolonged time off training. As a result of this, coaches often look for ways to keep athletes training in order to maintain fitness and even if at all possible, to keep training for their events.

To do this, the injured athlete must strike a fine balance; they need to be able to allow their body the time and rest needed for healing while still being able to put it under the stresses required to result in building strength and fitness.

There are a couple of devices on the market that aim to help runners in this regard. The Lever is a contraption of steel bars, pulleys and elastic cords that is set up on a treadmill and attaches to some tight fitting shorts that are worn while running. The way the system works is that by putting an elastic force pulling up the runner vertically from the treadmill deck they can run with up to 45 lbs of their bodyweight removed.

Unlike the Lever Movement that is a temporary device attached to any treadmill, the AlterG is a fully self-contained unit built around a treadmill. Running in the AlterG requires stepping into a skirt that is then zipped in to a large airtight balloon that encloses the entire running deck and pulls up so that it rises to the height of the runner’s waist. The AlterG then inflates this balloon and the pressure of the air in the balloon lifts the runner off the deck of the treadmill reducing their bodyweight.

There is a fairly good body of evidence that shows that the AlterG at least does exactly what it says it does in terms of reducing ground force interactions for runners who use it to run with reduced body weight. Basically the research has shown that when runners use the AlterG to run with a reduced body weight they are in fact seeing ground forces that are associated with that lower running weight.

In one very small three subject study using the Lever apparatus, similar results were shown so at least as a proof of concept, the Lever also appears to reduce ground force by giving runners a weight reduction.

Other studies have shown that with the reductions in ground forces there are related reductions in contact forces on the bones of the lower limbs as well as decreased contraction forces of the leg muscles all the way up to the glutei. Once again this makes perfect sense, if you are running with less weight you need to exert less muscular force to propel yourself forward and will sustain less impact forces to your skeleton upon landing.

So the first part of the question has some science to back up the theory-running with one of these anti-gravity devices will allow you to run while exerting a significantly lower physical toll on your body thus allowing an injured runner to potentially continue to run.

But what about the second half of the question? Is running in this way beneficial to fitness and to training? Several studies have looked at this question with respect to the AlterG though to date there are none for the Lever.

The most important finding related to fitness and training quality when running in an AlterG is the fact that once you exceed a 20% weight reduction, you start to see a significant decrease in the metabolic needs for running and an increase in the time to exhaustion. Again, this isn’t hard to understand. If you are exerting yourself less because of a lower body weight, you will be metabolically less active and have a longer duration of activity before exhaustion.

Put another way by different authors, when running up to 9mph, a 25% reduction in body weight requires a 3 mph increase in speed to run at the same VO2 when running at full body weight. Several authors have found that similar to increasing running speed, another way to improve training benefits while using weight reduction is to increase the incline of the TM, something that can be done with both the AlterG and the Lever.

So it appears that it is possible to get a near normal training benefit when using these devices but I think it is fair to ask, is an injured runner going to be able to do these modifications? If you are injured in some way after all, how likely is it that you are going to be able to increase your run speed by 3mph or run at a significant incline? It doesn’t mean that it can’t be done, only that this needs to be considered. Also, if you are running on these devices at 20% weight reduction where your metabolic needs are pretty much equivalent to running with no weight reduction then do you need the weight reduction at all?

A much less expensive alternative to these devices and one that also has been studied is deep water running. A couple of pretty good studies have looked at the benefits of deep water running and shown that if done properly, this activity can confer some real training benefits while exposing the body to essentially zero ground forces and allow for maximal recovery. In the end, water running is a very viable strategy for the injured runner as it will allow for higher intensity without any stress on the skeleton, tendons or muscles that might be injured.

Clearly both the AlterG and the Lever Movement device offer anti-gravity options for injured runners to rehabilitate themselves in a manner that allows them to continue running while decreasing stress to their injured selves. The efficacy of that running is going to be significantly diminished though unless they can really increase their pace or the incline that they run at and given the injury these may not be possible. When factoring in the cost and inconvenience of both of these modalities, deep water running begins to look increasingly attractive and a much more viable alternative.

Jeff Sankoff is a LifeSport Performance Coach, the TriDoc, an emergency physician, triathlete and USAT and Ironman University certified triathlon coach. He works with athletes of all backgrounds and abilities. To learn more about working with Jeff to achieve your triathlon goals, please contact office@lifesportcoaching.com and learn more about Jeff on his coaching page.